In the late 1960s, computers located at UCLA and the Stanford Research Institute became the first two nodes in the packet switching system, leading to ARPANET, becoming the first fully functional computer network in the world.

This breakthrough would turn out to have world altering consequences, as the basic technology grew into the internet that we know today. Computer networks have evolved for many decades, and with the growth of the internet, we have seen an increase in cloud computing and thus the need for computer networking technicians.

With all that being said, are you asking yourself, “What does a computer networking technician do?” 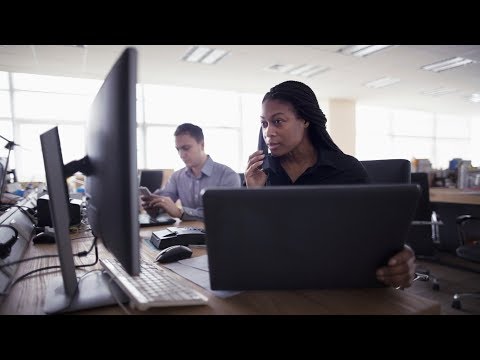 What Does a Computer Networking Technician Do?

According to the U.S. Bureau of Labor Statistics, computer networking technicians typically do the following:

What Is a Computer Network?

A computer network is a basic set of devices connected together to share information. This includes both a network of physical devices on an organizational level and cloud computing.

What Is the Internet?

The internet is the basic network of all networks. It consists of millions of interconnected individual devices, as well as computer networks across the entire world. The internet uses standard network protocols (TCP/IP) for communication and, with it being in the public domain, is free for all users.

What Is the Internet of Things (IoT)?

Whether it is an alarm system that syncs with a mobile phone for homeowners to keep an eye on their houses, or a refrigerator that tells you when you are out of milk, all of these items are part of the IoT.

What Is Cloud Computing?

Cloud computing delivers networking space for businesses of all sizes to store data in the cloud. This data consists of database information, software, analytics, and intelligence.

Cloud computing offers a remote network that gives businesses flexible resources and the ability to scale as needed. It saves businesses money by offering the network size they need at any given time.

Cloud computing is easy to implement and upgrade. It allows a business not to have to invest in hardware that is maintained by employees. Rather, the computer networking technician is responsible for managing the cloud computing system.

Cloud based resources generally are broken up into layers. From top to bottom, these are:

Software as a Service (SaaS)

This allows businesses to offer software applications over the internet. Typically, this is done on an on-demand basis using a basic subscription service.

This networking structure allows the business to focus on software upgrades and security patches, allowing the cloud to manage the infrastructure and maintenance of the network. A common SaaS application is an office tool like Microsoft Office 365.

Platform as a Service (PaaS)

PaaS supplies on-demand services for developing, testing, and managing software applications. PaaS makes it easier for web developers to create web apps, without extensive setup and management issues. The infrastructure is located in the cloud and includes servers, storage, and networking. This allows organizations to avoid buying software licenses for every employee.

Infrastructure as a Service (IaaS)

With IaaS, a business rents basic IT infrastructure for services, storage, networking, and operating on a pay-as-you-go basis. This is a benefit because IaaS quickly scales up and down depending on demand. Businesses avoid the basic expenses associated with large computer networks and owning physical servers.

What Is the Difference Between Clients and Servers?

A server is a device that holds data for a website and sends it out when requested. A client is a different device that requests to view, download, or use the content. The client device can connect over a network to exchange information. These devices can be connected directly with an ethernet cable, over a physical network, or in the cloud.

What Is Network Infrastructure?

Network infrastructure refers to the software and hardware that combine to allow devices and computerized systems to communicate among each other, allowing for the operation and management of the network itself. Network infrastructure can include basic technologies like ethernet cabling, switches, and routers. It can also include more complex technologies like load balancers, firewalls, and network bridges.

The first step in designing any network is to determine the basic functions the network will be expected to provide. To begin, gather the following basic information:

Computer networks can be classified in different ways. One way of classifying networks is by geographic distance between the different components. These include LAN, MAN, and WAN.

A local area network connects devices within a small area. This may include a small organization or at-home computer network. The computer networking technician will work to conceive, maintain, and fix any existing networking systems so they run at capacity.

A wide area network covers a large geographic area. Computer networking technicians set up and maintain wide area networks for businesses. They spend time analyzing, testing, and evaluating these WAN networks to make sure they run properly and have enough resources to function with minimal downtime. The computer networking technician also makes sure the network is secure and performs at the capacity needed by the business.

Another way of classifying networks is designating them as open networks or closed networks. Open networks do not close upon themselves and connect to the internet, while closed networks are connected only to each other and do not have any external download or upload source.

What Is a SOHO Network?

SOHO networks are one of the most common ways for computers and electronic devices to be connected. The term SOHO means “small office or home office,” and it refers to both small businesses and home-based networks.

Computer systems communicate with each other and resources using network protocols. Most networks use multiple protocols. One of the most common, used with the internet and many other networks, is TCP/IP. Some of the other protocols are FTP for file transfers, HTTP for connecting to locations on the World Wide Web, and HTTPS which is a secure version of HTTP.

What Is an IP Address?

Internet Protocol (IP) addresses give devices across a network an address. Each device has a specific address to identify the destination and origin of that device.

If you enjoy the challenge of making sense of complex systems, there’s a high probability you’ll thrive as a computer networking technician.

Interested in learning more about the basics of computer networking? The Computer Technician Networking Specialist program at Hunter Business School is designed to prepare computer networking students for entry-level positions in the fields of electronics, computer technology, and networking.

All Computer Technician Networking Specialist program students build their own computers to be used in the classroom throughout the computer repair and training program. The networking component of the training program includes configuration, management, and troubleshooting of common wired and wireless network devices.

Contact us today to find out more about how to become a computer networking technician on Long Island.